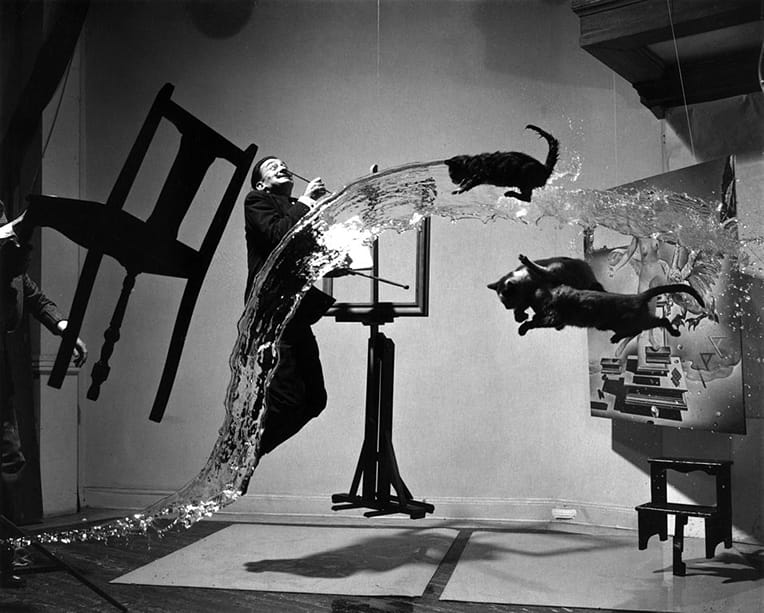 Today we are going to analyze the great photos made by recognized masters of photography. We will know more about 10 great photographers and their 10 well-known pictures.

A genius painter should have a brilliant portrait. Perhaps Halsman decided to follow this recommendation. The author was inspired by the unfinished work of Dali, “Leda Atomica” (you can see it in the photo) and wished to add surrealism to his picture. It took him 6 hours, 28 photo exemplars, a studio, additional sources of artificial lightening, several assistants who splashed water from buckets, calmed cats, kept chairs in the air and, of course, Salvador Dali to make this remarkable portrait. Tip: don’t be afraid to make a large number of photos. Some of them will certainly be successful.

Irving Penn and “Girl in Bed”

Despite the apparent plainness of this picture, it still charms and attracts, doesn’t it? Perhaps, all the works of this brilliant photographer can be described by his own words: “If I look at an object for some time, the view starts to fascinate me. Probably this is the curse of any photographer”. Moreover, he could render a strong feeling of fascination in his photos. The recipe for this masterpiece is simple: natural light from a window, a model and a contemplative author’s pose. Tip: if you want to take a beautiful picture, then fall in love with the subject of your photo shoot.

Virtually every photo by Avedon depicts the bright, but passing moments we usually don’t pay much attention to. But sometimes only such moments can reveal one’s true soul and nature. Tip: Try your hand in different genres. This will teach you to make portraits at unusual angles and capture the fleeting emotions that a model’s face reflects. Take photos of a person’s inner world, rather than his or her appearance and you simply won’t need any other means of expression.

Ansel Easton Adams and “The Tetons and the Snake River”

While speaking of great photographers and their works, we cannot ignore the creator of the zone system and the great author of books about photography, Ansel Easton Adams. Let’s take a look at one of his works, “The Tetons and the Snake River”.

In addition to interesting composition, we also can see how skillfully Adams used his own system to select the ideal exposure in this picture. If you look closely, you could see each of 10 zones from the pure black to the pure white. “The Tetons and the Snake River” by Ansel Easton Adams, 1942

Tip: even if you work with a digital camera, do not neglect traditional recommendations. It is useless to rely entirely on the exposure meter. Think about Adams’s zone system.

It is quite natural that this post simply could not be complete without Henri Cartier-Bresson. As a legendary report photographer and the creator of “Magnum Photos” agency, he said, “I really don’t like to organize events or direct them. It’s horrible… We cannot fake the real life. I love the truth and display nothing but the truth”. We can think over Bresson’s photos endlessly, but it is much more useful to read his books “The Decisive moment” and “Imaginary reality”. Tip: do not meddle in what is happening around you or imitate events. Just wait for the right moment and catch it!

Alfred Eisenstaedt became famous for one photo that displayed a sailor kissing a young girl. One picture taken at the significant moment helped him to become a real celebrity. It even doesn’t matter that the photo is blurred. The author managed to transfer the moment atmosphere. Tip: Always keep camera in your hands and be ready to take a nice shoot.

Ernst Haas is a pioneer of color photography. His famous cites:

Tip: the beauty is everywhere, just try to see and feel it.

Yousuf Karsh was a well-known Canadian portrait painter, who had taken many pictures of prominent political figures before this scandalous portrait. The story of the photo is rather unusual. After a speech in the House of Commons, the British Prime Minister entered the speakers’ room and saw the photographer’s equipment. Churchill allowed to take only one shot and lit a cigar. Nobody knows the exact reasons why the photographer went up to Churchill and pulled out the cigar from his mouth, but this is exactly what he did. Then Karsh came back to the camera and took this photo.

The image shows all Yousuf Karsh’s skills. He created the impression of depth and space by the help of lightening effects, the ideal pose, hand movements and other details. The result is this dramatic, gorgeous portrait, which clearly displays Churchill’s inner power. Tip: do not be afraid to provoke your models. Probably you’ll see their hidden characteristics.

Gjon became a popular photographer because of a unique mixture of “algebra and harmony” in his photos and the effect of a stopped moment. May be light graphic has gained such a popularity only thanks to Mili. Gjon practiced in different spheres and was constantly experimenting. Nevertheless, one thing always remained the same. It was his ability to capture the grace and drama of the moment.

Tip: never forget that photography is more than aesthetics. Experiment with such technical parameters as focus, long exposure and depth of field.

We decided to notice this press-photographer at the end for a particular reason. His words should be the motto for anyone who wishes to become a good photographer: “I could not see the limits of photography. As soon as I reach one top, the other immediately begins to beckon me from afar. And I am on a new way”. Tip: Never stop learning and achieving new goals. Take photos not with your camera, but with your soul.

Besides, analyze works of the most famous photographers in the world as much as possible, absorb their experience and notice what means of expression they used. One day you will surely notice how this knowledge imprints on your pictures and becomes the quality of your photos.